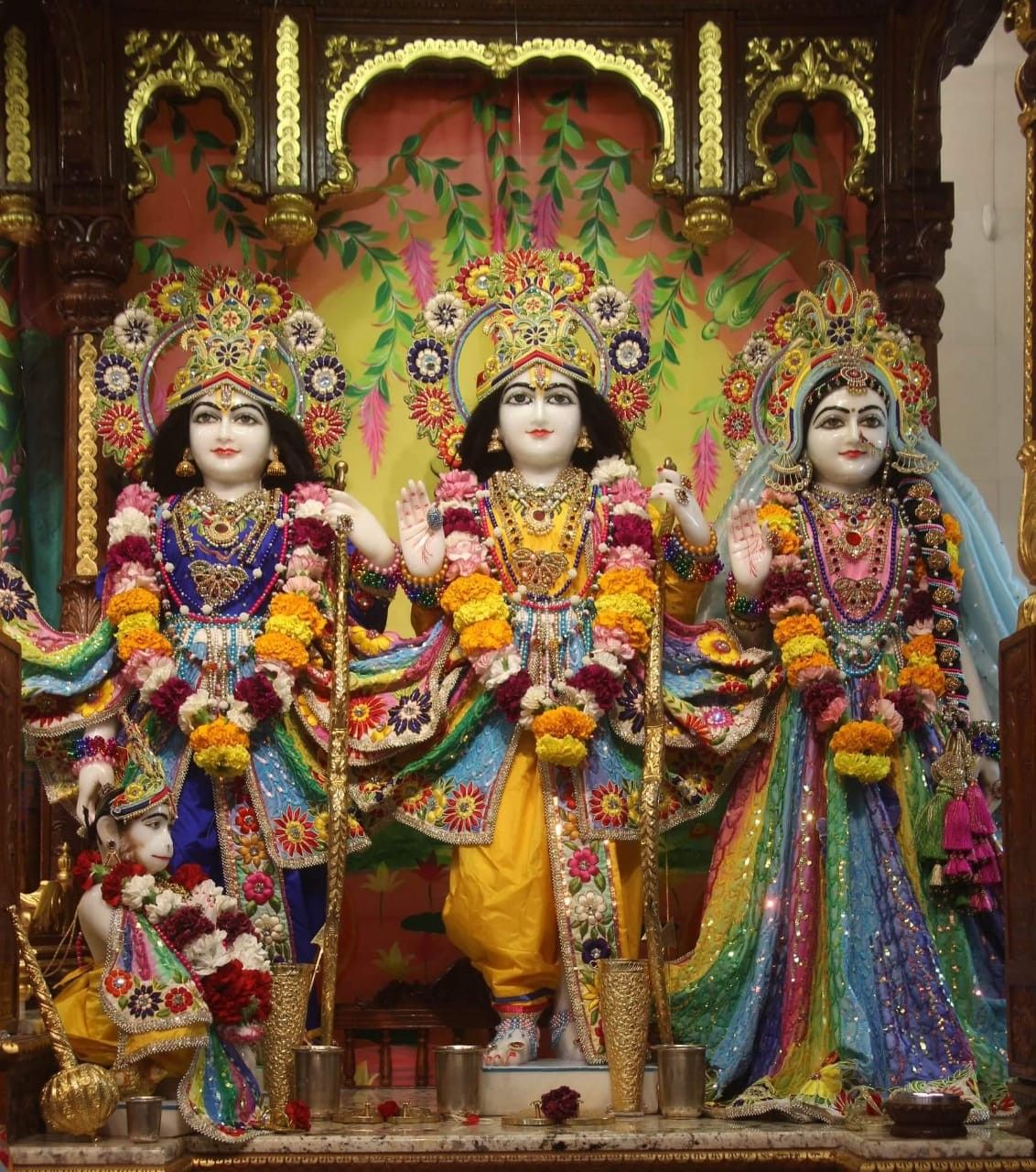 Whenever and wherever there is a decline in religion and the rise of irreligion the Lord appears millennium after millennium.

The Lord, out of His sweet will, descends into this world, but doesn’t take birth like ordinary human beings. He appears whenever there is a need for the protection of devotees. The Supreme Lord descends in many forms like Matsya (the fish), Varaha (the boar), Narasimha (the half man, half-lion), and so on. All these forms of the Lord are very attractive to His devotees who take great pleasure in talking about His pastimes.

Being attracted to the incarnation of Lord Rama in that way, people celebrate that very day as Rama Navami. He descended in the Sun dynasty as the son of King Dasharatha and Queen Kausalya in Ayodhya (India). He had three younger brothers Bharata, Lakshmana, and Shatrughna. The Ramayana narrates the history of Lord Rama as His great character of the great King, responsible husband, ideal son and exemplified master, and so on.

Lord Rama was an ideal son. People remember His obedience to father and respectfulness to mothers till now with great honor. He, as perfect King and ruler, ruled for 14,000 years. During His ruling, being bereft from famine, scarcity of food and disease, people were living very peacefully in His kingdom. They had a strong bond of love with Him, lived only to serve, and please Him. He was very strict in following the rules and regulations, thus never be a step backward in judging even against His relatives. He was handsome, strong, brave, chivalrous, fair, gentle, sweet, kind, and always merciful to His devotees and all the citizens.

The Ram Navami festival normally falls in the Spring season according to the ancient Vedic calendar. Observing fasting, performing worship and chanting the name of Rama are considered auspicious events to celebrate this occasion. Temples are decorated with fruits, flowers, leaves, and so on. People read Ramayana called ‘Ramayana Parayana’ with great joy. It usually celebrates for nine days, beginning from the day of Ugadi and ending on Rama Navami. The significant of celebrating this festival is to emphasis the great character of Lord Rama like following the proper path against all dangers in life. Eventually, it is not only a festival of enjoying and having fun, but also an occasion where a lot of lessons can be learned and taught. It is a festival of getting goodness in all aspects of life and conquering all odds. Millions of people get attracted to the pilgrimages related with with Rama, like Ayodhya, Ujjain, Rameshwaram, and so on and they eventually, take a holy bath in the sacred river in those places and worship Lord Rama. Fairs are arranged in many places relating with the festival, thus it leads to celebrate this occasion with great enthusiasm.
Rama Navami, significantly important for the increasing the values of human culture and civilization through remembering the pastimes of Lord Rama. This is the great inspiration for the devotees to observe this occasion enthusiastically. People perform sacrificial fire and sing devotional songs in praising Lord Rama. Ram Navami is a festival of celebration and brings devotees into the way of true happiness and joy. People attain the strength and courage to fight against all the dangers life.

The word ‘Rama’ refers ‘bliss’ and so people remembering and praying Lord Rama can attain bliss. So we pray to remember the activities and follow the instructions of Lord Rama and thus, will be capable to achieve happiness.